October 1 this year, â€œRepair of household automotive products, replacement, and return responsibilityâ€ (abbreviation: â€œCar Three Guaranteesâ€) will be formally implemented. At present, a number of auto companies have announced that they will actively implement the Three Guarantees policy before the arrival of October 1. The reporter found that these companies are dominated by their own brands and joint venture brands, while imported and luxury car brands that are more expensive are slower.

Independent companies and joint ventures took the lead in implementing the â€œthree guaranteesâ€ ahead of time and extending the warranty â€œCar Three Guaranteesâ€ policy is an industry norm but not a law, so the enforcement and effectiveness of each car company is not the same. The reporter learned that most of the companies that have implemented the "Car Three Guarantees" policy in advance have adopted a quality assurance policy that exceeds the time limit required by the state.

The service policies among various manufacturers can also be said to be characteristics of each bureau. Among them, BYD's four-year 100,000-kilometer warranty period is currently the longest-term company among the three companies. During the warranty period, 99.9% of its parts and components are also covered by the warranty.

In addition to extending the warranty period to 3 years or 100,000 kilometers (the state-specified three-year or 60,000-kilometer repair period), Dongfeng Yulonna Zhijie can also obtain an extension of the core part to 6 years at a price of 5,000 yuan. Or 150,000 kilometers;

Mercedes-Benz's three-bag policy is to extend the warranty policy to three-year-old kilometers, and can be retrospective, as long as the Mercedes-Benz vehicles purchased during the period from March 1 to August 30 this year can enjoy the "car three bags" policy. 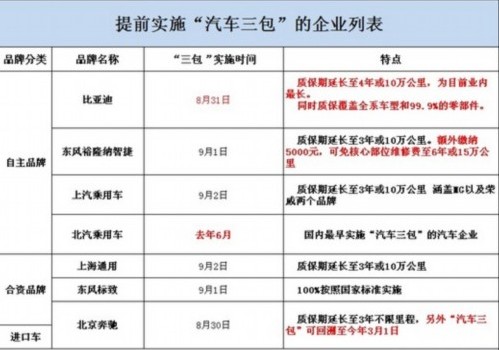 In addition to Mercedes-Benz, imported cars and luxury brands did not implement the "Car Three Guarantees" policy ahead of time. Compared with self-owned brands and joint venture brands, the company has achieved the "Car Three Guarantees" policy in advance. Currently imported car brands and luxury brands are not only Mercedes-Benz. Most do not have plans for early implementation.

The reporter visited a BMW 4S shop in Beijing and sales staff told reporters that it has not yet received any instructions from the BMW manufacturer about the â€œcar three packsâ€. The reporter called the Audi, Lexus, Infiniti and other brands of 4S shops, the other party also said that there is no early implementation of the "car three bags" plan.

Brief introduction of car three bags: The repair period is not less than three years or 60,000 kilometers

The second is to break the old rules that the manufacturer used to â€œreturn the package without repairingâ€ of the family car. For example, according to the â€œThree Guarantees Regulationsâ€, within 60 days or within 3,000 kilometers, the steering system of the family car has failed and braked. System failure, fuel leakage, body cracking, consumers can choose to return the car or change the car free of charge; within the warranty period, steering, braking, suspension, front / rear axle, body and other systems of the same main parts, more than 2 times replacement There is a fault, you can choose to return or change the car.

The third is to impose relevant responsibilities and obligations on manufacturers and designated repairers. These are absolute benefits for consumers. The sooner they are implemented, the sooner consumers will benefit.