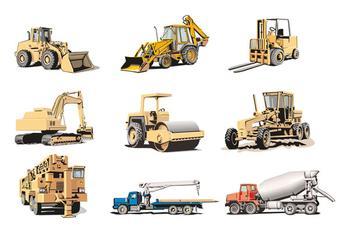 Last year and the first few months of this year, several companies that manufactured excavators, loaders, and other construction equipment had trouble. The main problem lies in the slowdown in economic growth. Of course, oversupply of equipment is also a major factor. This led to a decline in sales and inventory, and the companyâ€™s accounts receivable increased significantly as customers were struggling and payments were prolonged. People once believed that with the acceleration of economic growth, all these problems will be solved this year. However, it seems that the economic growth outlook remains volatile, and the recently announced data on manufacturing activities and profits of industrial companies are almost insignificant.

Vik Chopra, an analyst with Sun Hung Kai Financial Services, noted that recent sales data for some devices have turned positive. However, he also pointed out that the comparative base of these data is low, and the prospect of recovery is still not clear. Signs of recovery are hard to find giving sufficient evidence to those who are not optimistic about this industry. Zoomlion Heavy Industry Science & Technology Co., 1157. HK, 000157. SZ, referred to as Zoomlion is an example of this. Zoomlionâ€™s stocks listed in Hong Kong and mainland China were suspended on Monday. A previous Chinese news website said that it had received reports on the companyâ€™s alleged fraudulent sales data. Zoomlion declined to comment and said it will issue an announcement. However, as of the time of this writing, the company has not issued an announcement. In terms of market value, Zoomlion is the second largest company in the Chinese construction machinery industry with a market value of US$8.9 billion. Investors will be worried. This year, Zoomlion has defended itself once. In January, the media and regulatory authorities received anonymous materials to report the companyâ€™s false sales. Zoomlion stated at the time that the disclosed accounting information was complete and accurate. The recent performance of Zoomlion did not give people too much reason for optimism. In the first quarter, the companyâ€™s profits fell by nearly 75% compared with the same period of last year, and the declining momentum may be intensifying. According to Barclays, in early May, Zoomlionâ€™s sales of excavators in a key market decreased by 50% from April. Since the beginning of the year, Zoomlionâ€™s share price has fallen by one-third. Management must make a convincing response to this report. Otherwise, after the resumption of trading, the share price of Zoomlion may further decline.